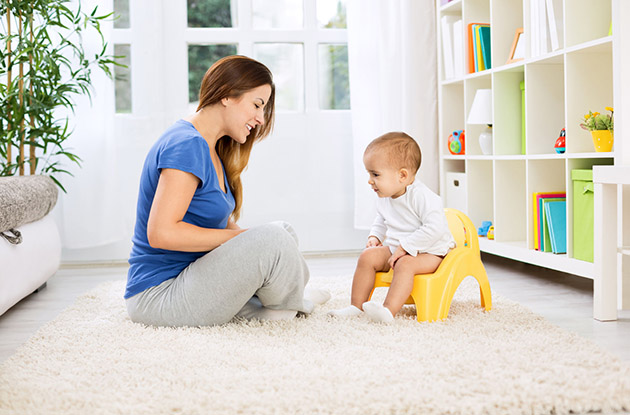 What Potty Training Taught Me


His third birthday came and went. His friends all potty trained one by one. The other moms discussed different methods and what worked for them. Still he wasn’t interested. I began to despair. I knew that he could do it if he wanted, but he didn’t.

“What if he’s never ready?” I wept to my husband. “He’s nearly 4!” I shrugged off the disapproving comments in mom forums about the topic of “late” training. I ignored a potty training consultant who told me that kids have to potty train between the ages of 2-3 or face long-term problems. I refused to try and force him, as was suggested by some of these “experts.”

Everyone had a piece of advice to give me. “Read him potty stories,” his preschool teachers said at parent-teacher conferences. We had a dozen.

“Go underwear shopping,” said other moms. We had drawers of unwanted underwear.

I realized that half of my anxiety stemmed from the fact he had always been the first of his friends to hit milestones. Was my competitiveness and anxiety causing his reluctance? He certainly couldn’t care less that he wasn’t potty trained. The mere discussion of it would result in tantrums and tears. So we waited some more. I decided to focus on what he wanted, rather than what he was “supposed” to be doing.

Then one day, when he was 3 years and 8 months old, I told him casually we were about to run out of diapers. “Okay,” he said. A few days later he came out of his room asking to sit on the potty. I cheered and did a special dance. Two more days passed and instead of peeing on the floor, he said, “I need to go potty” and ran back to the bathroom. Something had shifted. A week later I told him we’d run out of diapers, and within three days he was trained, day and night, with no fuss, and no need for big rewards. I can count the number of accidents he’s had since then on two hands. My gut instinct had been right all along.

When people ask me what method I used I shrug and say, “I didn’t. I just waited until he was ready and he did it.” It took me three years and nine months to realize that the parenting expert who has the most to teach me about my son is my son.

Author: Emma Steven is a British freelance writer living in Manhattan with her husband, two small kids, and two cats. Previously the Manhattan calendar editor for NYMetroParents.com, she writes about parenting and New York City. She has written dozens of parenting articles for NYMetroParents, and has also been published on Parents.com and Livestrong.com. When asked about what she most misses about the UK she’s most likely to say British humor and least likely to say British weather. See More

FTKny.com Unlock your child’s gifted potential. Here at FTKny.com we have the largest selection of child-centered, play-based and educational enrichme...

Children's Museum of the Arts

New York, New York Children’s Museum of the Arts is a nonprofit art museum that introduces the transformative power of the arts to children and their families.